Getting comparable ROIs from tracking

This tracking study conducted by Bruzzone Research was designed to meet  the need for more reliable audience measurement, as well as reach and  recall in advertising. More specifically, this study was to measure the effect of Starbucks advertising during the summer of 2013.

Two key measurements are used to evaluate the effectiveness of each media:

o The number reached (per 1,000 respondents) for each 1 cent spent (per capita)

o Additional buyers (per 1,000 respondents) for each 1 cent spent (per capita)

The key point to be made here is that these measures are directly comparable for all media – including Out-of Home. People either recognized the advertising or they didn’t. And among those who did, there was either a higher number reporting recent purchases, or there was not.

The first figure below shows both measures for each of the 24 advertising platforms used by Starbucks during the Summer of 2013. They are ranked by the number of additional

buyers. The long bars show the number reached was much greater than the number affected.

Comparisons of the number affected – the short bars – are critical, so the second figure shows the same data plotted on a log scale that magnifies the short bars and compresses the long ones. 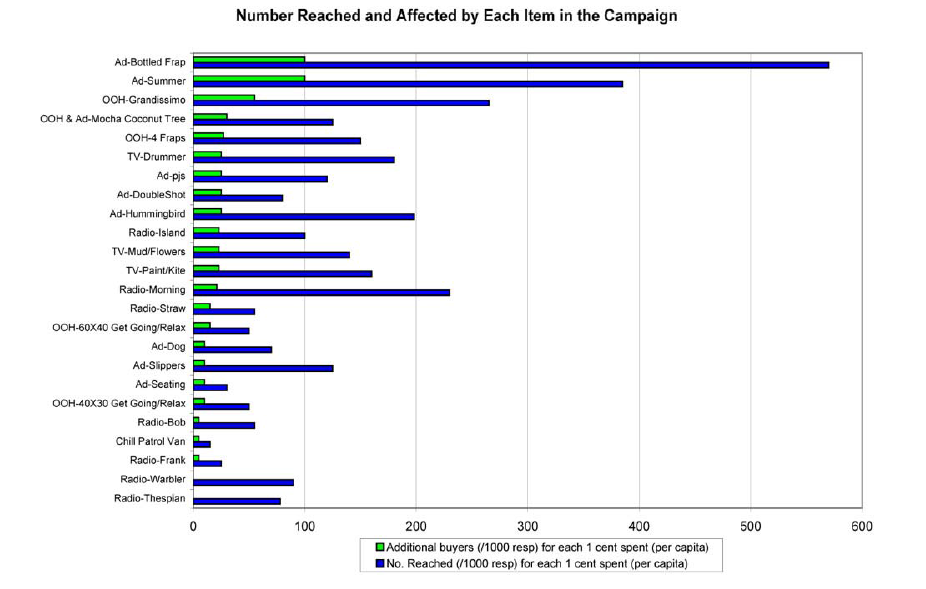 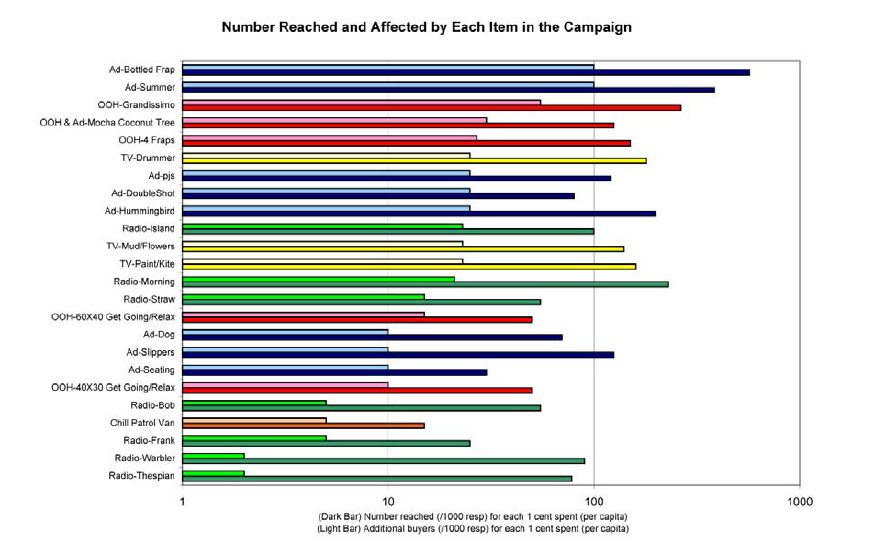 The chart shows there were wide differences in the return on the investment made in each piece of advertising. How did Out-of-Home fare in this comparison? They are the red bars on the chart. Three of the OOH items in the test bunched up near the top. The rest spread out down the bottom half of the chart. The blue bars show where the eight magazine ads fell. The seven radio commercials that were tested are green, and the light yellow bars show where the three TV commercials fell. The van is the brown bar near the bottom

Conclusion: OOH was competitive. No other media was clearly better.

Who did the best job reaching people who were not reached by other media?

The below chart has three sets of bars showing which media did the best job reaching those not reached by TV, radio and print respectively. As you can see, in each case, it was OOH that reached the greatest number of those not reached by other media.

Read the full study here: OOH VS. OTHER MEDIA